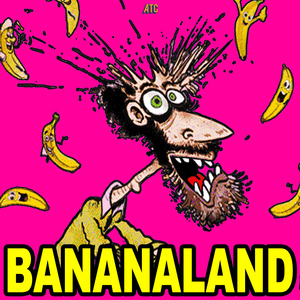 NAME DROPPING AND MY FRIEND CHER

Rube: If you could be stranded on a desert island, would you?

Rube: Hey, I never thought of that. What a great idea. Let's start a band!

Odd Todd stops by and shows everyone how to make corn chips on top of the missing engine of an old, abandoned, weed covered, rusted out truck. A miniature, toy gorilla inside a snow globe comes to life and checks in with the weather. And Rube passes out sober and...
Listen Now

Shelia's been despondent lately. Keeping to herself, staying in her room a lot. Then school called and they said that she hasn't been there three times this week. This morning, I went into her room and there's sand all over her bed sheets. I think Shelia's been selling sea shells...
Listen Now

Hey kids! In the coming weeks, there will be some exciting news coming from All Things Comedy that will be great for Bananaland, so we thought we'd rebroadcast the first show we did after joining the network. Lot's of changes since this show originally aired in 1934. You'll hear "The...
Listen Now

Gingerly approaching that wedge shot from the bunker gave the ball the right height, but the wrong spin. The ball didn't bite and it rolled about 2,000 miles into Florida swamp land. While looking for his ball, a big, old croc put the bite on Arnold Palmer. Now he really...
Listen Now

SAY GOODBYE AND SAIL AWAY

Father: Don't argue with me! Son: You SHOULD put all your eggs in one basket so you know where they are. Father: Insolent phaut! Son: And you should keep your basket at The Tooth Ranch! Father: Ooooo! I've had all a father can take. Father takes off his clothes and...
Listen Now

An old photograph of Peabo Bryson stops by Bananaland to teach Rube how to become a contemporary, quiet storm chaser. Insane harmonies from a large choir that's been living inside an acorn for 12 years. Pish Posh is back with more breakfast dance moves on a budget, and find out...
Listen Now

Discover why Bananaland is the silliest, funniest, and fastest growing podcast in the universe. If you're already in the know, enjoy a trip down memory lane with the raucous compilation. And be sure to see me live in San Francisco at Doc's Lab Saturday March 19th at 9:00pm! Get your...
Listen Now

The Concert For Snow Man Relief

It can be a sobering wake up call and reality check when your doctor tells you your still in the third grade. Your immediate reaction will be, "why me?", then you'll want to play kick ball. Don't waste time, get your affairs in order. Tell Jennifer you have a crush...
Listen Now

Hey, if you have a minute, can you tuck it in your pocket? Pockets stuffed with minutes? Take a moment from the bowl next to your keys on the counter top. Use it to empty your pockets at the counting machine down at the grocery store. Lots of times we...
Listen Now
Next Page
Advertisement