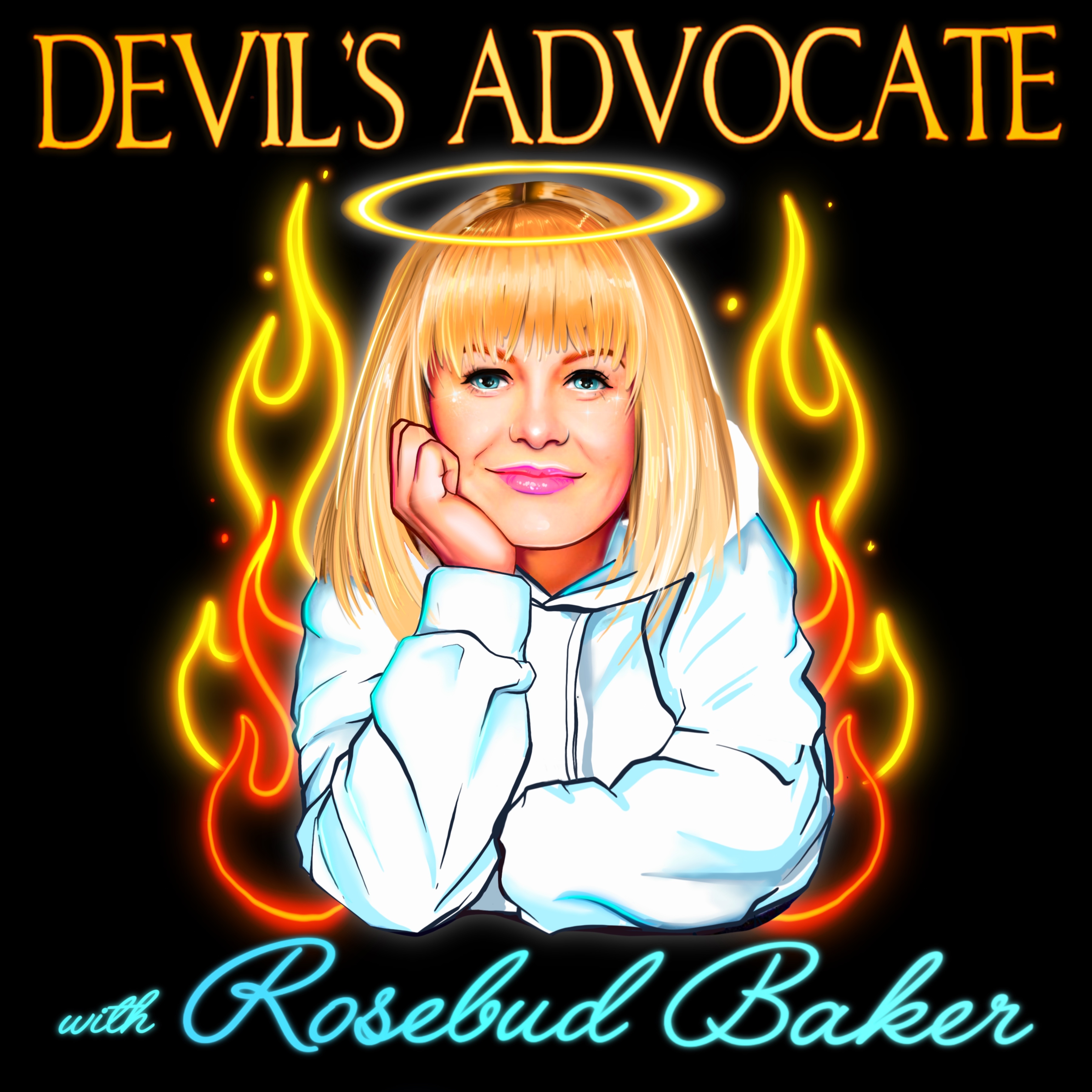 Standup comic Rosebud Baker has been called a lot of things: “tiny demon,“ “satanic rascal,” ”atomic bulldozer.” She may not be a good person, but she’s a pretty funny one. “Devil’s Advocate w/ Rosebud Baker” features interviews with other stand-ups that dig into what’s funny about the worst things that happen to us, and why those things make us funny.


Standup comic Rosebud Baker has been called a lot of things: “tiny demon,“ “satanic rascal,” ”atomic bulldozer.” She may not be a good person, but she’s a pretty funny one. “Devil’s Advocate w/ Rosebud Baker” features interviews with other stand-ups that dig into what’s funny about the worst things that happen to us, and why those things make us funny.

Today's guest is the one and only, HILARIOUS (paid advertisement), VERY FAMOUS IN NEW YORK, Cipha Sounds! After spending last summer on tour together with Michael Che, Rosie and Ciph catch up on what life has been like ever since. Ciph is one of the few comics getting to do comedy again, and he's getting to do it in Ohio with Dave Chappelle, on the same stage where 8:46 was performed not even two weeks ago. We talk about what it's like to perform after months without it, what drew Cipha to comedy after making a name for himself at New York's Hot.97, and The Four Agreements. Bad Advice for a listener who can't get her boyfriend's roommate to stop trying to smash.

This weeks episode features comedian Aminah Imani host of the Wine Before Nine podcast, Six Foot Nothing podcast, and host of one of the longest running shows in NYC, Comedy at the Knitting Factory, originally started by Hannibal Buress. We talk race relations, white people's response to the protests, the...
Listen Now

In the spirit of Memorial Day Rosebud welcomes veteran and comic Brian Simpson to the podcast to talk about how he went from life in the military to life as a standup comic. We also talk about the pros and cons of dating other standup comics, and offer some straight...
Listen Now

This week Rosie welcomes her friend, comic, fellow maniac NATHAN MACINTOSH to the podcast to talk moving to the woods, conspiracy theories, and cults. They also tackle the age old question; would you rather fuck a hottie with genitals that make a doctor flinch, OR a hottie with no eyes...
Listen Now

This week Rosebud welcomes friend and member of the Dead Family Club, the hilarious Heather McMahan. The gals connect over conspiracy theories re: the virus, about how people who have experienced death are dealing with being surrounded by it, and what being engaged during the quarantine feels like, when "forever"...
Listen Now

Rosie tries talking about current events and gets so far down the rabbit hole of her own mind she accidentally reveals her own lack of confidence. Whoops! Other topics include empathizing with Trumps bleach drinking advice, Mike Pence not knowing how masks work, living next to a morgue, and Rosie's...
Listen Now

Episode 9 - The Worst Thing That’s Ever Happened To You

In the last episode done from her quarantine in Los Angeles, Rosebud asks listeners what the worst thing that ever happened to them was, and attempts to answer the question “what’s so funny about trauma?” She also reads aloud a Facebook message from the guy she lost her virginity to...
Listen Now

This episode is dedicated to you, the listeners. Well, they're all dedicated to you. But this one includes the topics YOU requested, and turned into a stream-of-consciousness rant that covers everything from "skeptical witchcraft" to handmade gloves with fingers made from condoms for the Afterworld. Bad advice for someone trying...
Listen Now

This week, Rosebud welcomes her guest, Coronavirus, which has made a nice home for itself in her body. She talks about her symptoms, being quarantined with her soon to be husband, getting a new puppy, and cutting her own bangs, joining TikTok, and basically living her entire quarantined life against...
Listen Now

Rosie welcomes guest Ron Funches (Trolls movie, Undateable, and host of All Things Comedy podcast Gettin’ Better) to talk about the unique challenges of having what he calls “a different life;” becoming a Dad at the age of 20, and having to make the "responsible choice" of becoming a stand...
Listen Now

Due to Covid-19 quarantine rules, Rosie went solo for this one. She talks to herself about recent events, catching everyone up on life in quarantine as a newly engaged gal, and rails against introverts bragging about how much they love life inside their homes. (It's cause nobody likes them!!!) Anyways...
Listen Now
Next Page
Advertisement