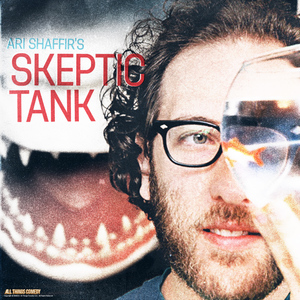 Mike Vecchione had me over to the apartment he shares with his partner Dan Soder to talk about his first trip to the Orient. He went to China for two weeks. What happens when you make your first trip to Asia is your mind just about explodes with new stimuli. So I was lucky to get Mike on mic as soon as he got home.

Mike is an amazing comic and his new album, The Worst Kind Of Thoughtful, is out now.

I'm going to be in Austin September 19-22 with Adrienne Iapalucci and in Phoenix October 27 with Big Jay, Schaub, Callen, and Theo Von. Go to AriShaffir.com for tickets to either show and my November/December European tour.

This episode is brought to you by nobody. Enjoy, you worthless commies.

Adrienne Iapalucci and I were driving back to Manhattan from a road gig in Syracuse and we decided to do a podcast about road trips. Well, it barely centered on road trips because I'm a terrible host, but it was a really funny podcast nonetheless. Had me cracking up a...
Listen Now

Ari Shaffir comes to my apartment to tell you about Passover. All of it. Not just what you're supposed to do, but also where the holiday comes from, all the laws, the seder, what matzah tastes like. Everything. It's probably the best I've ever been in terms of not interrupting...
Listen Now

Aubrey Marcus came over to my apartment and we had a really in depth discussion about open relationships. Aubrey is the most honest person I've ever met on the subject. He has truly looked inwards and examined all the angles. It's a really great discussion on the topic. Aubrey has...
Listen Now

Joe List kept me awake on the drive back from Boston by telling me all about Boston. Meta as balls, huh? He grew up out there and we talked about all the casual violence, the racism, the women, the drinking, the sports. Everything we could think of. And while we...
Listen Now

Des Bishop came over to Skeptic Tank headquarters (my apartment) to tell me about Ireland. Des moved there from Queens when he was a teenager and managed to go from a Brooklyn problem child, to one of Ireland's most successful comedians. He tells me about his observations of the people...
Listen Now

Ryan Oneill drove with me from Salt Lake City to Boise to talk about the gnar pow we got in Utah. We skied 6 out of 7 days, stayed at 3 different places, and did 5 shows. It was a tremendous week of skiing some of the best powder on...
Listen Now

Rachel Simmons met me to talk about her research on female development and confidence. She just came out with a new book on the subject so we talked about that, about the pains of doing press, and she craps all over my water bottle. Rachel was my friend in high...
Listen Now

Chloe Hilliard came over to talk about her days as a journalist before she started standup. We go over all the problems with journalism today, including fake news. And we get into some nice stuff about race and white ladies. This episode is brought to you by Ziprecruiter.com. At Ziprecruiter.com...
Listen Now

Tim Crockett met me in Athens, Georgia to tell me about the monumental feat he is undertaking. Tim is going to row, BY HIMSELF, across the Atlantic Ocean. He'll be miles from the nearest boat or assistance. He'll have limited supplies. The guy is absolutely crazy in the best way...
Listen Now
Next Page
Advertisement