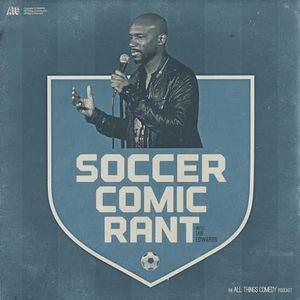 Soccer Comic Rant #317 Manchester United & Inter Milan advance to the quarter finals of the Europa League tournament, will Sevilla, Wolves, Shakhtar Donetsk or Basel be next? The competitions is tight and it's gonna be a great tournament with some quality teams. The Champions League trophy is up for grabs and Bayern looks like they'll get their name on it next. And I defend Willian like he's my girlfriend from Neil's verbal attacks.

Soccer Comic Rant #310 The Premier League Is Back

Soccer Comic Rant #310 The Premier League returns and I couldn't be more excited. It's been like 10 weeks so I'm down. Aston Villa vs Sheffield United, Manchester United vs Tottenham and more. We talked about the NBA returning, and baseball even though we don't know much about it. Bayern...
Listen Now

Soccer Comic Rant #299 If you miss football like we do then listen to us miss it. W/ Guest @martinwharris & @Leehudsoncomedy
Listen Now