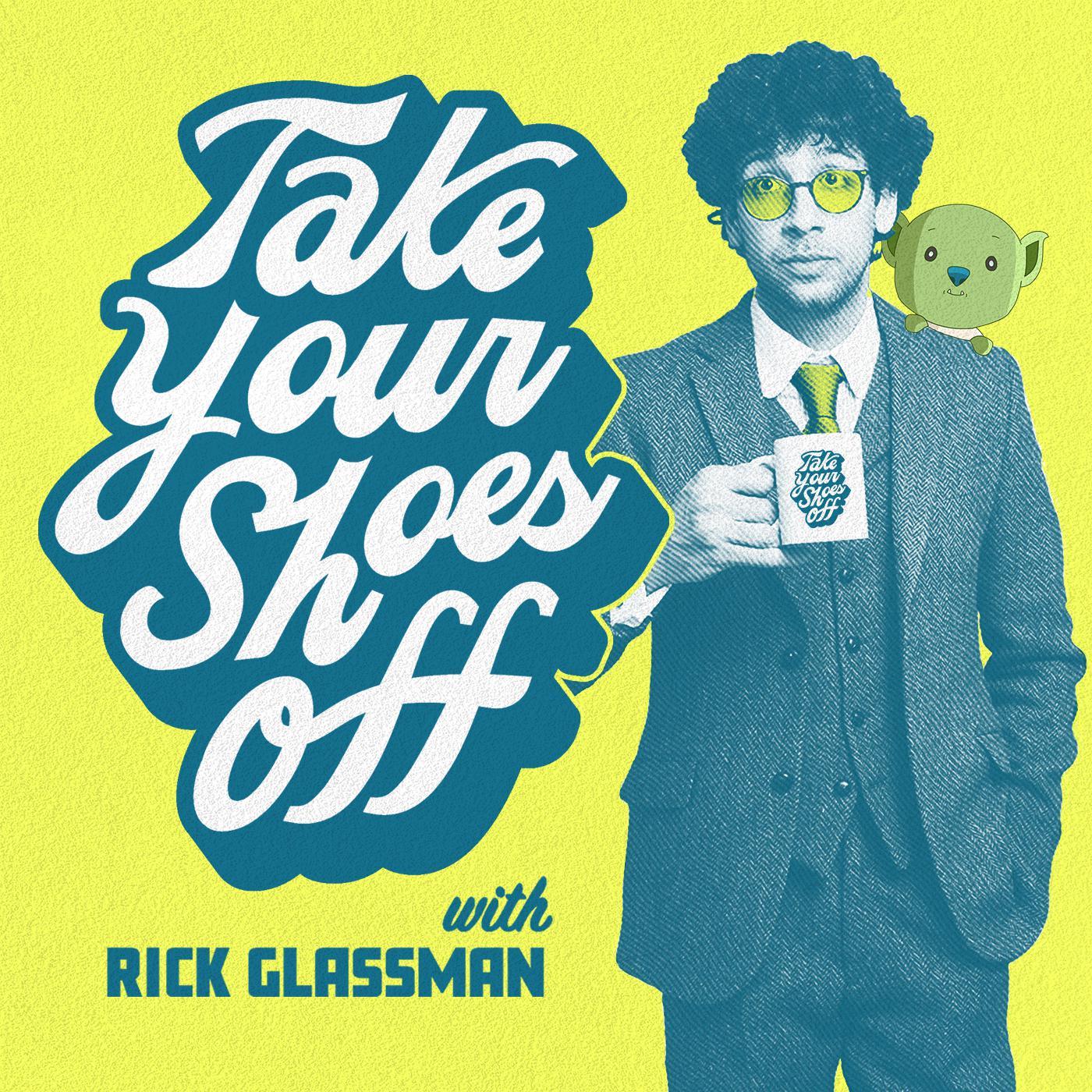 Take Your Shoes Off

Rick Glassman
Hi, I'm Rick Glassman, and I'm a goofy guy and a cute boy. As a kid, I had debilitating OCD. I still have a lot of “things.” The title of my podcast “Take Your Shoes Off” is a microcosm of my need for control and order in a world that... keeps their shoes on. I created this podcast to showcase a more serious side, as I have conversations with some of the funniest and most interesting people in the world. I’ve learned the language of comedy in an attempt to survive this shoes-on world, so of course there will be some goofs and spoofs, but think of this podcast as continue reading...


Hi, I'm Rick Glassman, and I'm a goofy guy and a cute boy. As a kid, I had debilitating OCD. I still have a lot of “things.” The title of my podcast “Take Your Shoes Off” is a microcosm of my need for control and order in a world that... keeps their shoes on.

I created this podcast to showcase a more serious side, as I have conversations with some of the funniest and most interesting people in the world. I’ve learned the language of comedy in an attempt to survive this shoes-on world, so of course there will be some goofs and spoofs, but think of this podcast as you being a fly on the wall, as opposed to being an audience member in a theatre.

Please, take your shoes off, and enjoy!

Ever wanted to know who Rick’s female comedy counterpart is? Well, she’s on the balcony today! It's phenomenal comedian, Beth Stelling. Days before releasing her hour-long special on HBO Max, “Girl Daddy”, she climbed over to the balcony to chat with Rick about all comedy and business. They naturally slip into some mustache bits and we get to know Beth and her process from filming her first special. Rick reveals his female body hair gripe and Beth details her 4 comedy-career rules, none of which she still keeps. The two discuss their issues with repeating jokes and why it’s been a struggle for them both. Is their struggle of needing to continuously write in fact part of their... "genius?" Beth battles feelings about self promotion whilst being extremely introspective. She talks about performing on the road with Sarah Silverman and gives her take on Bill Burr’s story about being groped by a female comedian, and the double standards of that reversed behavior being common place for a female comedian. It's a tit-slapping good time, goblins! BE SURE TO CHECK OUT BETH'S SPECIAL, "GIRL DADDY" ON HBO MAX THIS WEEK -- on AUGUST 20TH!! (see the trailer here: https://www.youtube.com/watch?v=_dNMzxjSV30) Where Rick came up with his BALCONY SPECIAL idea: https://youtu.be/DOn2l3fGxMI?t=4367 RICK GLASSMAN MERCH: https://www.rickglassman.com/store PATREON: https://www.patreon.com/takeyourshoesoff INSTAGRAM: https://www.instagram.com/rickglassman DISCORD: https://discord.gg/XXy4brb BETH STELLING: INSTAGRAM: https://www.instagram.com/bethstelling "GIRL DADDY" TRAILER: https://www.youtube.com/watch?v=_dNMzxjSV30 CAREER BIO: Beth has performed on Jimmy Kimmel Live!, The Meltdown with Jonah and Kumail, @midnight, Last Call with Carson Daly, The UCB Show, The Pete Holmes Show, and We Can Fix You. In 2015, she had a special released as part of the Comedy Central series "The Half Hour" with her latest comedy album "Simply the Beth" available on iTunes and Amazon. Vulture named it one of the best comedy specials of 2015. She also starred in Showtime's special Comedy of SXSW. Beth tours stand-up comedy clubs, colleges and festivals, guest starred on the Prime Video series Red Oaks, and wrote on Crashing, a HBO series from Judd Apatow starring Pete Holmes. Sound Mixing: George Krikes See omnystudio.com/listener for privacy information.

We’re back again for another episode to brighten your Mondays! This week's guest is actor and podcaster, Ethan Suplee. You’ll know him from nearly every film you’ve ever loved… he’s been in movies with Denzel Washington, Tom Hanks, Leonardo DiCaprio, Edward Norton, and Johnny Depp. The boys meet for the...
Listen Now

Will Forte (The Balcony Series)

This is a BIG one Boppers and Goblins. Comedy Legend, Will Forte, joins us for the continuing Balcony Series! You’ll know him from Saturday Night Live, 30 Rock, American Dad, Bob’s Burgers, The Last Man on Earth and as the title character in his own creation, one of the FUNNIEST...
Listen Now

Welcome back, Goblins! We have a rare episode with not one but TWO GUESTS! Brent Morin climbed up the balcony with his podcast-other-half and fellow Stand up comedian, Jason Collings. Together, they are collectively known as the hosts of The Lions Den Podcast. Jason, a rookie goblin didn’t come prepared...
Listen Now

Welcome back to another installment of Can-You-Even-Hear-Our-Guest-Over-The-Background-Noise-And-Upstairs-Neighbours-Balcony-Series! This time its Rick's favorite food-loving/everything bothers her friend, Esther Povitsky! She’s back, and this time with a brand new special on Comedy Central Called "Hot For My Name" which is a title Rick would argue about but nonetheless, VERY proud of her...
Listen Now

Hi Boppers and Goblins! This guest is close to Rick’s heart and family. Danny Bilson is a writer of film, television, and video games. He is also a professor at The University of California. Danny was Rick’s uncle's writing partner, Paul DeMeo, up until Paul’s passing in 2018. This episode...
Listen Now

#TYSOGoblins & #GlassmanBoppers, This guest has taken his shoes off so many times, he’s practically the Barefoot Chief Goblin! It’s comedian & fellow podcaster, Erik Griffin. For his FOURTH appearance, the boys unite to discuss all the current news effecting the comedy community and how they’re navigating it. A few...
Listen Now

We’re back for another balcony session, welcoming STAND UP COMEDIAN AMIR K!!! **HEADS UP!! This episode has some tension from both sides. We decided to share because this is a real moment captured between 2 people who love each other. Rick and Amir have a 10+ year friendship, and in...
Listen Now

Next up another TYSO first timer (so we don’t blame her for forgetting socks), actress Sosie Bacon! Rick met Sosie last year when they shot their Amazon pilot together. WHICH just got picked up to series!! (https://deadline.com/2020/06/jason-katims-israel-on-the-spectrum-series-amazon-1202959498/) She joins us on the balcony, which even doubles as a toilet (to...
Listen Now

Hi Goblin Family, A few of our episodes were filmed before the protests and overall global civil-unrest took place. We felt it necessary to let you know, as it is not discussed during this chat. All ad revenue from this episode will be given to the Black Lives Matters global...
Listen Now
Next Page
Advertisement